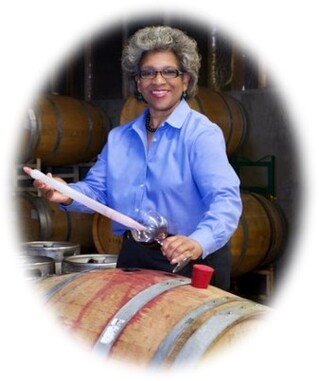 Ms. Theodora Lee, a senior partner and trial lawyer at Littler, founded Theopolis Vineyards in 2003. In the wine world, Ms. Lee is known as Theo-patra, Queen of the Vineyards. Her passion for wine began upon her arrival to San Francisco from Texas in 1987, primarily due to the influence of her law firm mentors, many of whom owned vineyards. This led Ms. Lee to take several viticulture classes at UC Davis, before deciding to develop her own vineyard. In 2001, Ms. Lee purchased sheep land in the Yorkville Highlands of Anderson Valley, and began developing her vineyard. This process was quite complex from clearing land, doing soil tests, obtaining permits to remove some trees, drilling an agricultural well, and terracing the property. Finally, in 2003, Ms. Lee planted her 5 acre vineyard. Ms. Lee adopted her Greek name from pledging Delta Sigma Theta Sorority, and established Theopolis Vineyards.


In addition to practicing law and making wine, Ms. Lee is a settlement commissioner, Early Neutral Evaluator, AAA certified arbitrator and mediator.  Also, she is a contributing writer to numerous employment law publications and regularly appears on TV and Radio, including NPR and PBS, speaking on various employment topics. Ms. Lee is the Co-Board Chairperson of the Dallas Post Tribune Newspaper, one of the oldest Black Newspapers in North Texas. She also serves as Co-Chair of the Board Development Committee for the Board of Directors of the YMCA of San Francisco and a Member of the Executive Committee of the Board of Directors of the Bay Area Legal Aid.   She is the Past President of Bay Area Black United Fund and the Alameda County Community Food Bank, and Past Vice President of the United Negro College Fund San Francisco Advisory Board.  Ms. Lee is a graduate of Spelman College and the University Of Texas School Of Law. Prior to entering the practice of law, Ms. Lee worked as a Senate intern in Washington, D.C., for Senator Sam Nunn.